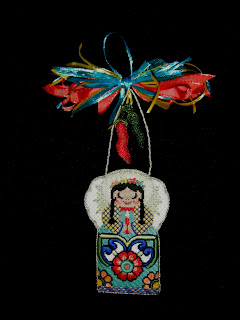 "Maria" is the first of a new series of six Talavera angels that will be introduced at Sample It.  She is stitched in a combination of fibers and comes packaged with a full-color stitch guide and a beaded red chili pepper embellishment from One World Buttons.

The stitch guide was written by Kelly Doyle, who picked up and finished this project after MaryLu Leger's untimely death.  She has included stitches such as Diagonal Burden, Amadeus, and a Hedabo Ring.

Kelly has taught needlepoint embellishment for A Needlework Place in Mesa, Arizona and Phoenix Needlepoint Co. before relocating to Houston. She has also taught classes at previous TNNA markets for Anne Jerlow's geisha series and Garden Cat Square.  Kelly stitched several ornaments for the White House Christmas tree during the Clinton reign, and her Sandy Jenkins Sunflower Girl appears in the revised edition of Jo Christensen's The Needlepoint Book.  She is available to travel and teach classes.

Kelly will be helping me at the Sample It table and is bringing along "Consuela", the next angel in the series, so please stop by and say hi!
Posted by Tapestry Fair Needlepoint News at 9:56 AM 2 comments: 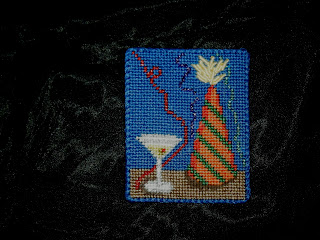 Wishing everyone a healthy and happy 2012.
Posted by Tapestry Fair Needlepoint News at 5:55 AM 1 comment:

Tapestry Fair Needlepoint News
Phoenix, Arizona, United States
Tapestry Fair has been producing handpainted needlepoint canvases for independant needlework shops since 1973. This blog is a preview of new designs and models we are currently stitching.